What Makes A Fan? 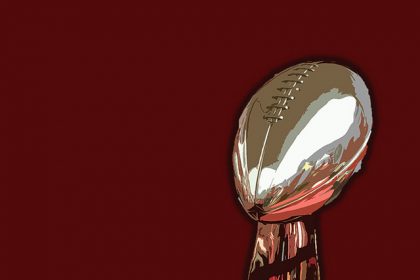 So this weekend marked a proud day in recent 49er history. And by recent I mean, this season. San Fran advanced to the divisional championship round of the NFL playoffs! And I, like many others around the country, watched the game with baited breathe, just hoping our boys would pull off the win over the Carolina Panthers. We were not disappointed. By a score of 23-10, the Niners defeated the cats and left them in anguish.

But while I am more than ecstatic to share in the celebration of my team’s sweet victory, I do have to wonder….can I really call myself a fan? In all fairness, I only watched one game during the regular season, when the Niners happened to be playing the Titans here in Nashville for the first time in 8 years. I did watch that game at the stadium though, so that counts for extra points, right? Not to mention, when purchasing the tickets at the start of the season, I was fighting some major morning sickness. I literally purchased the tickets in between hurls into the toilet. That’s got to count for something, too!

It’s just that when it comes to football, I rarely care at all about it until it’s the playoffs. You will never find me on a Sunday afternoon in front of a television watching grown men in tight pants chase a pigskin. It’s not like hockey where I will watch a Predators game anytime, any place. I’ll be right down at Bridgestone Arena cheering them on at their last home game, knowing they have no chance of coming close to playoff contention. Nor is it like baseball, where any day during the summer, I’d be willing to head down to the nearest Buffalo Wild Wings (a place I despise) just to catch a Yankees game. No, with football, I’m much more likely to be found at the dog park on a fall Sunday than I am a ballpark.

Heck, I don’t even have a good reason for being a fan! It’s not like a come from a long line of San Fran fans. Most of my family are Giants fans. I didn’t spend any part of my childhood watching Joe Montana and the 49er dynasty of the 1980’s. I didn’t grow up in San Francisco. Hell I’ve never even been to San Francisco. My dad’s girlfriend happened to go there when I was in 7th grade and brought me back a 49ers t-shirt so thus, I decided they would be my team. Who does that?

Still, the Niners are my team. And once the playoffs arrive, as long as the Niners are in, they are the team I am cheering for all the way. I watch the game from my living room and don’t move until it’s over. I wear the jersey and cuddle under my 49ers blanket for good ju-ju. I make Ender wear red and gold. Even our cat Jake resumes his good luck spot on the side of the couch. And if that doesn’t make me a fan in most people’s eyes, fine. I’m still going to rub it in your face when the Niners win Super Bowl XLVIII!