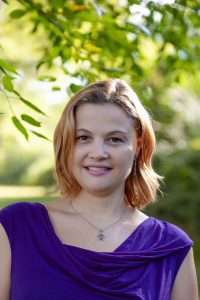 “I’m a lot funnier than you think I am!”

Emily hails from Syracuse, NY – the snowiest city in the USA! She obtained her bachelor’s degree in English education from Niagara University, where she also dazzled sports enthusiasts with her less-than-stellar talent as D1 basketball cheerleader. “Go Purple Eagles!” She then attended SUNY Buffalo and received her master’s degree in humanities, with concentrations in both theater arts and communications.

After finishing school, Emily realized the New York State job market was over-flooded with unemployed teachers. So she decided to pick up and move to the greener pastures (and among the nicer residents) of Nashville, TN. She has been here 5 years now and she has no plans of ever moving back home!

Emily has been actively involved in the live theater and independent film community for many years. She has acted in numerous theatrical productions, as well as several indie films.. Her first self-penned, full-length play is scheduled to go into production sometime next year.

Emily teaches film and drama at a local high school and is a freelance writer for Dream Row Magazine. She lives in Nashville with her 4 cats, (Jake, Skatie, Valentine, and Setzer) and her beagle-mix dog, Maeby. Oh yeah…and her fiance, Ender Bowen!