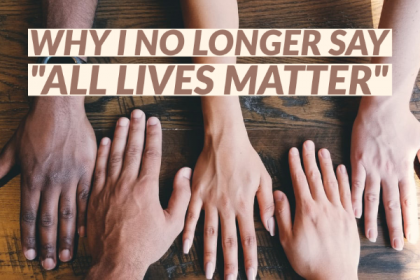 Yes, it’s true. I used to say “All Lives Matter.” I was one of those. One of those self-righteous, sanctimonious pricks who chose to blatantly ignore everything that the “Black Lives Matter” movement stood for, intentionally stealing the focus away from the true issues plaguing African Americans in America.

Except I wasn’t. I was very aware of what #BLM was about. Their supporters were outraged that black men and women were being targeted based on the color of their skin and ending up victims of violent – often deadly – crimes. They sought out justice for the injustice that had been done to people like Trayvon Martin and Michael Brown.

I too was outraged by the things that were happening. I was shocked and horrified to turn on the news here in the 21st century and see stories about hate crimes. How had we come so far since the Civil Rights Movement and yet there still be so much racial divide in this country that people were being killed as a result? It was wrong. So wrong. Even though I was not a member of the black community, seeing prejudice and racism in action burned me to the core.

But if I am being honest, as stirred up as I was in their message, I never truly felt comfortable saying the slogan “Black Lives Matter.” Not because I didn’t believe that they do matter. But because I was raised to believe that all men and women are created equal. Everyone is different but we’re all equal, therefore someone’s worth or value shouldn’t be quantified by the things that make them different. So to me, saying “Black Lives Matter” felt like I was saying “I am outraged by what is happening to black people.” When what I really wanted to say was “I am outraged by what is happening to people.” I felt the “black” was turning the victims into a sub-group, rather than the focus being that they are “people”. I believed it was the noun that should get us stirred up, not the adjective.

What I was saying was “I stand beside you because you are a member of the human race, same as anyone else. Any injustice that has been done to you upsets and offends me not because of the color of your skin but because you are a person and as a person, your life matters. Your skin color makes no difference to me. I am outraged by oppressions you have faced because your life matters as a member of one human race. All people are equal in the eyes of God, in the eyes of the law, and in the eyes of me. Therefore I can find no justification for the crimes that have been committed against you. No person should ever be treated the way you have. All lives matter equally and I find it deplorable that yours was regarded as less than anyone else’s.”

The problem is, all that would have made for a very clunky hashtag. It goes well beyond the max 280 character Twitter allotment. Even Facebook fogies get wandering eyes after 2 or 3 lines and move on to the next post. Plus, it was far too much to write every time I wanted to express my feelings about social injustices. But unfortunately, when you reduce a protracted message that sums up an entire way of thinking into a 15-character hashtag, somehow part of the context gets lost. What was meant to be a message of inclusion and solidarity was instead being seen as a message of superiority and condescension. I was using the slogan as a message of unity intended to remind others that these victims of injustice were our brothers and sisters. But people were seeing it as a message of deflection in order to discredit the BLM movement. What I was purporting was: “Your life matters just as much as mine or anyone else’s.” What people were taking from it was: “She doesn’t think she should put any more focus or attention on black lives than anyone else’s, even though theirs are the ones in danger.”

Admittedly, at first, I was a bit indignant. How dare people turn such a positive sentiment into something offensive! I was saying something encouraging, something constructive, something good! How dare they take it to mean something indecent and hostile! How could so many people have a problem with a slogan whose intent was all about equality? It was inspirational!

Then it hit me…..if my action was offending more people than it was inspiring, no matter what my intent was behind it, it wasn’t effective.

And so I stopped saying “All Lives Matter”. Because I got it. I was saying “Your life is every bit as important as mine or anyone else’s because you are a person, same as everyone else.” But what people were hearing me say was “What makes you think your life matters more than anyone else’s?” And if they were hearing the latter, I wasn’t doing a very good job of inspiring the former.

Sometimes we have to be willing to stop for a moment and see the issue from the other side. That’s easy to do when it’s something in which we have merely a casual interest. Not so much when we passionately believe we hold the one and only key to world peace. Sometimes though, when we are willing to step out of our own perspective and see things through our opposition’s eyes, we learn that we’re not actually on different sides at all. We just have different ideas of how to achieve the same goals. Equality is an ideal that the BLM movement shares. Their expression just puts a focus on the group with the most pressing need.

When I stepped outside of my own mindset and considered the perspective of those who found my “All Lives Matter” statement offensive, I came to realize that even though my sentiment was good, the perception was damaging. Once I understood where my opposers were coming from, I was inspired to find better, more effective ways to spread my message of standing together as one human race.

I wonder what the world would look like if more of us were willing to do that.