Truth Be Told, I Lie 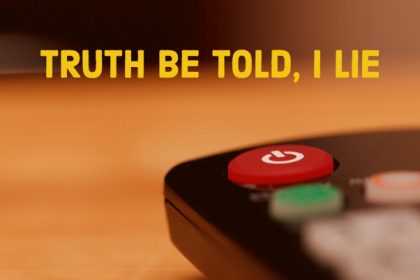 We have this ritual in our house on Saturday mornings. It actually starts on Friday night when my husband and I pray that our children will A) sleep through the night, B) stay asleep until after 8 in the morning, and C) won’t wander into our room and accidentally catch us in an embarrassing moment. (I cringe at the thought of them knowing we watch Fuller House!) If we are fortunate enough to receive all 3 blessings, Saturdays begin with kicking and shoving each other out of the bed. Whichever one of us hits the ground first is crowned the loser and must go downstairs to prepare a home-poured breakfast of cold cereal while the winner is granted a coveted 15 more minutes of sleep.

One such morning, after I had lost the battle, my daughter asked to watch one of her favorite shows while eating her Apple Jacks. I cringed. I just couldn’t stomach the thought of one more episode of Paw Patrol. Don’t get me wrong, it’s a cute show. And who wouldn’t want to watch a bunch of puppies, who bear a striking resemblance to the Village People, reverse all the crises of their small town? But there’s only so many times I can watch that Mayor Goodway fail to protect her town and have to call upon this pack of dogs to do it for her while she stands back and clings to her pet chicken (which she keeps in her purse!) I mean, seriously…..who was her opposition in the mayoral race?! Tara Reid? All I’m saying is, if I were a citizen of Adventure Bay, she would not have gotten my vote. How do you attempt to buy fireworks and wind up ordering piglets instead??

But I digress. This particular morning, I just couldn’t be “that” mom. So I suggested that perhaps we watch Blaze and the Monster Machines instead. Now there’s a show I can get behind! I get to spend 15 minutes learning math and physics and wondering if Pickle will ever tire of watching Crusher’s dishonest schemes blow up in his face. On this day, I felt a good “let’s go find Gabby’s missing toolbox” plot would go well with my coffee.

But my daughter wasn’t in a compromising mood. She just had to see if Skye was going to get over her fear of eagles and be able to rescue one! (Spoiler alert…..she was.) And no suggestion of Shimmer and Shine genie magic or Top Wing mission was going to sway her! So I did what any parent should do when their child’s happiness encroaches on their own sanity….I lied.

After several Oscar-worthy “attempts” to click on the Nick Jr. app, I delivered the devastating blow to my child. “The app’s not working, Honey.”

“But I want to watch Paw Patrol!” she countered, as if her unyielding desire should override any supposed technology failures.

“I understand that but we can’t watch it if the app’s not working.” (The key to a convincing lie is to follow it with an unshakable statement of truth. Scientifically speaking, if the app is not working, we truthfully cannot watch the show.)

Crocodile tears welled in her eyes as her dreams of canine heroism were smashed. She sobbed inconsolably for nearly 20 seconds until I offered to turn on Mickey Mouse Clubhouse. All her woes were immediately forgotten as she let Mickey know that yes, she did want to see his clubhouse. She enthusiastically shouted “Meeska, Mooska, Mickey Mouse” and I nestled into the couch with my sanity in tact. Crisis averted. Maybe Mayor Goodway should call me next time she breaks a heel!

I don’t care what the child rearing experts claim, lying to your child is a necessary evil of parenthood! I don’t know how anyone expects to survive without it. Sometimes it simply must be done.

I got into a discussion on Facebook once that revolved around Santa Claus and whether or not you should tell your children that he is or isn’t real. I personally am all about my kids believing in him. Let’s face it, the harsh reality of being thrown into the real world is going to suck worse than a Barney marathon featuring all the Baby-Bop centered episodes. Why not let them enjoy something magical and incredible for as long as they can? But if you’re not part of the pro-Santa bandwagon, that’s fine. I’m not here to judge. Just so long as your reasoning for it isn’t the one that was thrown out by one such “that” mom during this great Facebook debate: “I don’t believe in lying to my children.” I’m sorry, what?!?! You don’t believe in lying to your children? Believe in it. I promise you, it’s very real. Come on over to my house sometime, I’ll provide you with some irrefutable evidence!

Are there seriously people who don’t lie to their children? Ever? I lie to my children every day!

“If you keep sucking your thumb, it’s going to fall off.”

“No you can’t eat the Lucky Charms. It’s a grown up cereal.”

“Your stuffed zebra went to the spa for the afternoon.”

“Yes, Mommy ate her all vegetables…earlier.”

“Honey that is a beautiful picture of your brother….oh sorry, of a taco.”

“I have no idea why your karaoke microphone isn’t working anymore.”

It’s as essential to raising your children as string cheese or those little Goldfish crackers. I’m not saying you shouldn’t be truthful with your kids about certain things. Sometime you do have to be honest even when the truth is hard to explain. Things like the death of a pet or family member, a separation or divorce, how Donald Trump became president. But remember, you’re not applying for sainthood. Cut yourself some slack if you tell a fib here or there to save time, money, or mental stability. It’s ok. By the time they’re old enough to realize all the lies you’ve spun, they’ll be teenagers and you probably won’t like them much anyway.

It’s true. I lie to my children. I’m not proud of it. But I let myself off the hook knowing that they will likely survive, and with the assistance of several sessions of minimally intense therapy, may even grow up to be semi-functional members of society. So let yourself off the hook too.

It’s all part of being an imperfect parent.