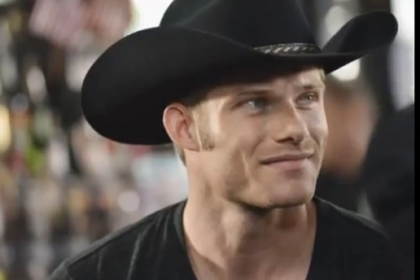 It is about time! Ever since Will and Grace made homosexuality cool, we’ve been seeing gay characters show up on every network television show from Modern Family to Orange is the New Black. And I think it’s great. Society has come a long way from the homophobic days of “Beware of Gays” PSAs (Totally serious about that, by the way. Look it up!). We now not only accept gays and lesbians as part of our society, but even enjoy storylines featuring them on our favorite shows. But despite this widespread acceptance of gays into television viewing, we’ve still been severely lacking on good, compelling, storylines surrounding them. Sitcoms still primarily use homosexual characters as a motive for witty punchlines. And dramas still tend to use them as a way to play up the discrimination card. All of which is fine, but personally, I’ve been dying for a gay storyline that is both real and gripping. And thank you to ABC’s Nashville for finally giving it to me!

If you haven’t been watching Nashville (and judging from its mediocre ratings this season, you probably haven’t), you need to! And I’m not just saying that because I live in Nashville and it features my city, which I love. I’m saying that because it’s a very well-written show that also includes great music, primarily composed by undiscovered songwriters right here in town. And for the first time, a show has given me a gay storyline that I can really get behind. When is Will Lexington going to come out of the closet and how will his career be affected when he does?

Sure the “will he or won’t he come out” story has been done before. Hundreds of times. But finally there is a character whose struggle with it has serious consequences. At first, I wasn’t crazy about it. I thought, “oh another gay character thrown in to make sure our show is P.C.” But as the story progressed, the more I became enthralled. Will is an up and coming country star whose big breakthrough is just around the corner. His girlfriend is the new face of country music, Layla Grant, and he has a spot opening up on tour for one of the biggest male artists in the industry. But Will is hiding a big secret that only doofy Gunnar knows about. Will is gay.

I know what you’re thinking. How is this any different from Jack coming out while dating Joey on Dawson’s Creek? (Don’t try to hide it. You all know you watched it too!) The difference is, Jack’s coming out would potentially have serious consequences on his friendships and family relations. Will’s coming out could potentially jeopardize his entire career! His passion for music, his love of performing, everything he has worked for could be gone in an instant if the world finds out he is gay.

Initially, I thought this was stupid. I mean come on. It’s 2014 (or 2013 when the story arc began). Who doesn’t work with, go to school with, attend church with, or live next-door to a gay man or lesbian woman? Would society really turn on a country artist just because of his sexual preference? And then I got to thinking about it. Are there any openly gay country artists? Not since Chely Wright announced she was a lesbian and come to think of it, she hasn’t been heard from on the country music scene since. There have only been rumors about Terri Clark and she hasn’t put out an album since the rumors began! Hmmm…maybe Will does have something to worry about.

Hell, I can’t think of any recording artist, in any genre, who is openly gay, except Clay Aiken and again….where is he now? Yes, on the 2012 season of Celebrity Apprentice but where else? Maybe we haven’t progressed as far as a society as I would like to believe.

The point is, now I am glued to the TV every Wednesday night at 10/9central to find out what’s going to happen next. My heart is breaking for this young man who is killing himself to hide who he really is inside in order to keep his dream alive. But it’s only a matter of time before it all comes out. And I can’t wait to see how Nashville is going to react!