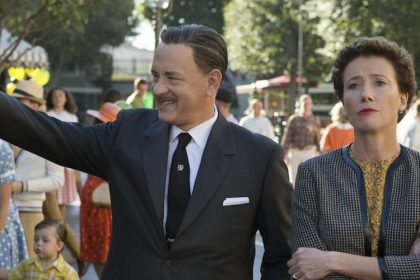 Went with the hubby last night to see Saving Mr. Banks. Wow! What a great film! First of all, I love period pieces…..and no, for you non-film enthusiasts, that does not refer to chick flicks! I love films that take place in different decades, particularly in the 20th century. I love the nostalgia of them and I love, as a filmmaker, seeing how set and consume designers can recreate these time periods. And yes, the cinematography of Saving Mr. Banks was phenomenal, but I was surprised by how much I enjoyed the story! It was so well acted. (Of course, I wouldn’t expect anything less from a Tom Hanks movie. Although I have to admit, I really would love, just once, to see him don his Buffy garments from his Bosom Buddies days and get back into doing some classic comedy again.) And the characters were so real. While I did see Mary Poppins as a child, I don’t remember it all that well so I am sure there were a ton of in-jokes and references I didn’t get. But I loved Emma Thompson’s portrayal of P.L. Travers. Sure, she was an over-the-top, uppity, English snob who was incredibly overprotective of her characters but I could totally relate. As an award-winning writer, I know what it’s like to love your characters like family. Luckily, most experiences I have had have brought my characters to life as virtual replicas of the ones in my head. Sometimes it’s so accurate it freaks me out a little! But I would be defensive too if I felt filmmakers were not doing my characters justice. Even characters I have not created but merely developed, I consider my children, and I get nit-picky when I don’t feel they are being portrayed accurately. That’s why I can’t get mad at J.D. Salinger for never allowing Catcher in the Rye to be made into a movie. As much as I would love to see that, how could anyone other than Salinger really do Holden Caulfield justice?

But anyway, I digress. I thought the movie was wonderful and I’m so glad to saw it. Seeing movies always helps motivate me to work on more of my own scripts. Especially movies about making movies! So if you haven’t seen it yet, I highly recommend it. You will not be disappointed.