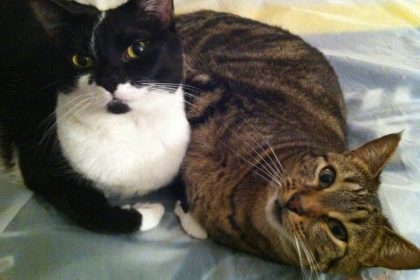 I am a dog lover. That I cannot deny. I have two beagle mix pups that are the light of my life. And I am a firm believer that you can pick a man solely based on whether or not he has a dog. I think if a man is owned by a canine, it is very likely he is going to treat a women with love, loyalty, and lots of spoiling. Dogs truly are man’s best friend. And I think most women would agree….a man with a dog = instant attraction.

I used to work as a vet tech and I vividly recall the time this amazing hunk of a police offer came in with his male, orange tabby. This man, whose name was Jordan (I think I can say that since it’s very unlikely he’s reading this blog and even if he is, I can’t imagine he’d remember the lowly vet’s assistant from an appointment he had 8 years ago!) was beautiful to begin with. He was tall with lose-yourself-in-them blue eyes and sandy blond hair that was as perfect as the sparkling, white smile on his face. He was built too. Definitely not one of those donut cops. He was the kind who could bench press me before throwing me down on his bed and…ummm….ooops! I think I’m getting off topic. Anyway, you get my point. He was drool-worthy.

Well, this particular day, Jordan came in with his cat, who had taken a bad fall out of a tree. The cat was hurt pretty bad. The vet had to do x-rays and finally determined that the poor little guy had shattered his hip. When we broke the news to Jordan, he asked what could be done to help his baby. (Okay, he didn’t refer to the cat as his baby, but it was implied.) The vet told him it would take major surgery in which we’d have to put temporary pins in the cat’s hip. Then, there would be a follow up surgery to remove them. The low-end estimate for the surgeries would be somewhere just over a thousand dollars.

Jordan didn’t even think twice. He replied “Do what you have to do. He’s my cat.” I immediately dropped to my knees and asked him to marry me. (Jordan, not the cat.) Any man who would unflinchingly spend over a grand to save his cat is a man I will say “I do” to.

Sadly, the engagement was short-lived. I think the fact that he had no idea who I was and hadn’t even noticed I was in the room until that minute, probably hindered us from having any real future. Luckily though, I did find a man who loves kitties with whom to share my life. And I never find him more irresistible than when he is holding one of our four babies in his arms. Meeeeeeooww!! (Pun definitely intended.)