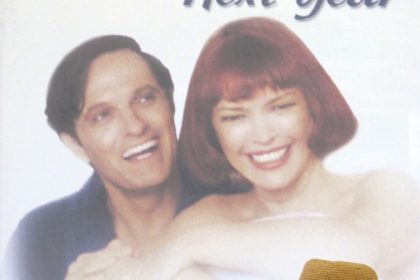 Every so often, I like to sit at home alone and watch an old movie I’ve never seen before. Particularly one that is considered a classic for some reason or another. The other night, I had a chance to do just that. Well, not just that, exactly. I did have my daughter with me. But she’s only 7 weeks old so she hasn’t quite learned to appreciate good cinema yet. She’s getting there though.

Anyway, I decided to queue up Netflix and came across a movie I remember hearing my sister say was one of her favorites. It was Same Time Next Year, starring Alan Alda and Ellen Burstyn. I had also heard (especially considering it was originally written as a stage play) that it was one of the great dialogue-driven movies. As a screenwriter, those are the types of movies I love most.

In case you’re not familiar, the story is about a man and a women, who meet by chance at dinner at a bed and breakfast in 1951. Despite the fact that they are both happily married, they have an affair. But not just a sexual affair. They spend the entire weekend together, talking and sharing the most intimate details of their lives with each other. (They even show each other pictures of their kids!) Then they agree to meet back at the same hotel on the same weekend every year. This annual affair continues on for 26 years.

Sounds kind of dull, I’m sure. A couple gets together every year for one weekend to hook up and talk? Zzzzzzzz! And how can you possibly like two characters who cheat on their spouses for 26 years? Plus the whole movie takes place primarily in one room. It’s a sure-fire recipe for failure. Yeah, I had my doubts too. But I have to admit, I wound up really enjoying it! First of all, the honesty between these two characters (despite the fact that they are cheating) is ironically touching. The two play a game with each other whenever they meet in which they have to reveal the best and worst story from the past year about their spouse. They actually look forward to hearing about each other’s marriages. It’s quite an intriguing dichotomy. At one point Ellen Burstyn’s character even says that although she’s never met Alan Alda’s wife, she feel like she is her best friend. (OK I know that sounds a little creepy but I swear, by that point in the film you’re so mesmerized by these characters that it’s not.) And because it was the 70’s, none of the sex is ever seen on screen. The whole movie consists of a man and woman sharing their life stories over a span of nearly 3 decades…..and I was absolutely enthralled.

It really made me sad though. Because it was the exact type of movie I’d like to write. An exploration of human behavior through the use of compelling characters and real, honest dialogue. But sadly, those just aren’t the kind of movies that appeal to audiences these days. Even in 1978, the film itself opened to mixed reviews. But were it to be released now, it would be a box office flop of biblical proportions. (Yes, there were a lot of bad films in the Bible!) There are no crazy special effects, computer graphics, or exquisite location shots. No seamless use of green screens, CGI, or million dollar budgets.Just conversation. The screenplay was nominated for Best Adapted Screenplay at the 1978 Academy Awards. Nowadays, it wouldn’t even cause a blip on the Academy board’s radar.

I wish we had more appreciation for these kinds of movies because they are the ones that really speak to us as people. They force us to look deep inside ourselves and face the things we’re afraid to acknowledge or the things we assume we are the only ones feeling. Have we truly lost our need for films that challenge society? Movies like When Harry Met Sally, Kramer vs. Kramer, The Breakfast Club, or St. Elmo’s Fire that really explore relationships and pose the difficult questions like “Can men and women be friends?” “Are single fathers as good parents as single mothers?” “Is it really possible to break out of your social circle?” or “What if life after college isn’t all that you’d been made out to believe it would be?” Or “Is it possible to be in love with two people at the same time?”

Unfortunately, it’s not likely I’ll ever win an Academy Award for the films I’ll write. They may never even see mainstream success. But I’ll never stop writing these kinds of screenplays. The ones that touch us deep down in our hearts and remind us of why we love movies in the first place….because they are a reflection of ourselves and our lives. I know there are others of you out there who would take Perks of Being a Wallflower over Transformers any day and it is for you that I will keep on writing 🙂