This One Is A Little Long… So Sue Me. 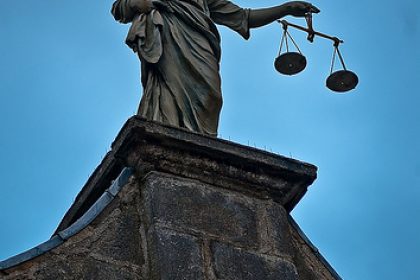 The other night was one of those rare evenings where Derek and I each found ourselves with a few free moments that actually coincided with one another. We decided to celebrate this blessed event, like most couples do, by sitting on the couch and staring silently at the TV. Unfortunately, my motor skills were not up to par and Derek managed to swipe the remote before my fingers even had a chance to twitch. Such occurrences are a fate worse than death for me, as they typically mean he plans to put me into a premature snooze by forcing me to watch one of those annoying political commentators drone on for an hour. This particular night was no exception.

I spent the first 20 minutes of the show poised and ready to snatch that remote as soon as Derek got up to pee or make a snack in the kitchen. I was dying to change the station to SoapNet. But just as that moment seemed to be approaching, my attention was caught by a story on the show about a mother in Staten Island who sued Little League Baseball Inc. over injuries her son sustained while sliding into second base.

Apparently, the 12 year-old slid improperly and as a result, tore his ACL and his meniscus. She sued the manager of the team for not teaching her son the proper technique. (Hey, as a former middle school teacher, I can attest to the fact that you can teach a 12-year old proper techniques until his feet fall off, but that doesn’t mean any of it is going to sink in!). And she sued the first-base coach for telling him to keep running to second base even though her son had hit very few doubles in his Little League career prior. (Yes, how dare he try to boost the kid’s self-confidence by encouraging him to run to second base!). And finally, she sued the league for using the wrong kind of bases (which, as it turns out, were league standard bases.) And here is the really scary part…the league wound up forking over a $125,00 settlement to her! Wow. The woman waits three years after the incident to file suit and finally another 2 after that, when the kid has moved well beyond his prime for Little League anyway, she gets $125,000 for being stupid. You know, 6 years ago I watched a man zip through a red light, run over a small tree, and crash into the side of a brick building because a surprise heart attack overtook him while he was driving. I wonder if I can sue him for the bystander trauma I endured from that. Every time I see a small tree, I shed a tear.

Let’s just forget for a moment that the risk of injuries when signing up to play sports should be assumed. Why else did this mother think she had to provide copies of their health insurance card before he could be eligible to play? But we’ll slide passed (pun definitely intended) the obvious fact that you shouldn’t be able to sue for “duh”! (Hello Miss “McDonald’s coffee is served hot? I had no idea.” Yes, I’m talking to you.) Instead, we’ll move on to the more disturbing aspect of this story….the long-term consequences. The Little League Baseball Inc. just handed out 125K to a parent of a member. How many other parents are going to do the same, now that a precedent has been set and they see there is profit to be gained? It won’t take long for the league to be forced to fold, thus taking away an organization that for years has been providing millions of kids with exercise, self-esteem, good sportsmanship, over-sized hats, storylines for Disney movies, and oh yeah FUN! I mean, it’s bad enough that a small minority of people, who believe that kids dressing up as fairies and superheroes and asking for candy is satanic, have taken the celebration of Halloween away from all kids in many parts of the country. Now we have to take Little League away too? Before we know it, our children are going to have nothing to look forward to but playing alone in their plastic bubbles. Until, of course, parents sue the manufacturer of the bubbles for not using “green” plastics.

Now I understand that sometimes lawsuits are necessary because sometimes there IS obvious negligence. You should be able to sue if your child is seriously injured from playing with a toy a company knew was defective and failed to recall. You should be able to sue if your doctor prescribes you a medication and fails to tell you that it could have a life-threatening reaction with others you are already taking. You should be able to sue if Taco Bell refuses to make you a cheesy, gordita crunch during its non-promotional time, when they have all the ingredients to make them year round. I’m fully aware of the need for such suits. I read John Grisham’s latest drama, The Appeal. But like any good system, greedy people are abusing it. Just like welfare or eBay.

Enough is enough. If people keep suing Little League for injuries, no one is going to want to volunteer to coach or run it. If people continue to sue doctors for incorrect diagnoses or failed treatment plans (and I am talking about in cases where there is no clear answer as to what the best plan is), no one is going to go into the medical field. If you want to sue your college for not being able to find a job after graduation….hey, join the club! (And get yourself a copy of “St. Elmo’s Fire”, the best movie ever! You won’t feel so bad about your own after-college slump.)

Somehow, society has got everyone thinking we’re owed something. Well, I hate to break it to you, but we’re not. We get what we work for and sometimes, we get a bad break. Sometimes luck just isn’t on our side. And when we finally run out of people to blame for our problems, we’ll be forced to see that most of what happens to us in our lives is the result of our own actions. And at that point, the only thing left to do will be to sue yourself. Now there’s a lawsuit I’d like to read about….how could you argue with that?