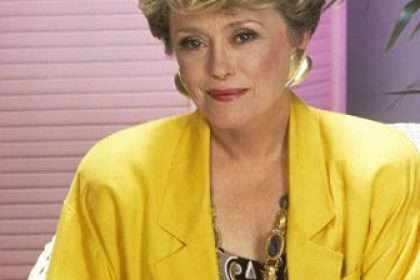 I can’t believe this is happening. I mean, the first time it was sort of expected. We’d all suspected it for a while but it was still a shock. The second time came as a bit more of a surprise, knocking the wind right out us. But this third time was a blow none of saw coming. And now we are left in the wake of national tragedy and forced to deal with its irreversible aftermath. How can we be expected to go on living in a world with only one Golden Girl left?

On June 3rd, 2010, the world lost Rue McClanahan to a stroke and subsequent brain hemorrhage. This is after first losing Estelle Getty on July 22nd of 2008 and then Bea Arthur on April 25th of 2009. So by my calculations, I am predicting Betty White will die of accumulating shame of being unable to revive Saturday Night Live from its decade-long dry spell from humor on May 15th, 2011.

I imagine this is how people felt when George Harrison died. Losing the Beatles, one member at a time, reminding people that nothing great lasts forever. First John Lennon’s untimely death in 1980 at the hands of a raging psychopath who was rumored to be in possession of a copy of J.D. Salinger’s Catcher in the Rye. (Is it a bad sign that my favorite book is often associated with sociopaths and serial killers?) Then the death of Ringo’s career, not long after. And then George Harrison’s death in November of 2001 due to complications from lung cancer. They say tragedies come in 3’s and this third Beatles loss was almost enough to push the world over its edge. Instead, Ticketmaster just gouged the prices of Paul McCartney’s upcoming world tour tickets, which everyone seemed to agree was the best solution. It certainly helped Heather Mills during the alimony settlement.

But I digress. The death of the third Golden Girl hit me with a wave of nostalgia like I hadn’t experienced in years. I remembered sitting on the foot of my mother’s bed, every Saturday night at 8pm, watching The Golden Girls on the TV in her bedroom. (Yes, The Golden Girls debuted in perfect correlation with my family’s solidification into middle class, appropriately noted by our membership into the 1980’s society of two-television homes.) Sure, I was only 6 at the show’s start so most of the sexual innuendos were lost on me. But I was 13 by the time the series finale aired so by then, most of those innuendos were still lost on me. But it didn’t matter. So what if I had no idea what Blanche was doing in her bedroom most of the time or why everyone picked on Dorothy for never “getting any”? Those “old ladies” were a riot!  By 1992, I couldn’t tell a story without starting it off with, “Picture it….Sicily…1942…”

Who didn’t love the episode when the girls travel to St. Olaf so Rose could accept her “Woman of the Year” award, where we finally got to see that Rose wasn’t the village idiot….the whole village was the village idiot! Or when Blanche, Rose, and Dorothy mistakenly get arrested for prostitution while Sophia goes off to meet Burt Reynolds? But I think my personal favorite is when Blanche, Dorothy, and Rose all wind up dating the famous actor who has come to Miami to star in the community playhouse production of Our Town. (As most famous actors do to boost their careers!) Blanche auditions for the lead role and tries to “enhance” her chances by stuffing her bra with balloons! Who can forget the famous line, “The moon is hanging awfully low in the sky tonight, isn’t it Busty?” Ah, what a great show.

Picture it… Orlando… 1989… a young Mouseketeer wannabe arrives at the newly-built MGM Studios park in Walt Disney World, eager to see what Hollywood dreams await her inside those gates. A stop at her soon-to-be favorite attraction, Superstar Television, which was an interactive stage show where people could be duped into thinking they were famous by being superimposed into scenes from various television shows, paid homage to her favorite Saturday night pastime, The Golden Girls. She then boarded the tram for the Studio Backlot Tour. Visions of sugarplums danced before her eyes. Actually, they were more like Star Wars ships and the pod from Flight of the Navigator. But her favorite part of the ride….the whole park in fact, was the tram’s trip down Residential Street, where she got to see the facade of what she genuinely believed was the home of The Golden Girls, her honorary Saturday night grandmothers. That Mouseketeer wannabe was me!

Sadly, both Disney attractions have long since been demolished or replaced by disappointing icons of current pop culture, like The American Idol Experience. Although in all fairness, this particular Disney park was running a little low on the vomit-inducing attractions. And in addition to the ground-breaking, sleeper-hit TV series being stripped from our cultural relevance, we are now down to only one surviving cast member. It just doesn’t seem fair that sexually active old ladies are no longer a staple of American family television.

But luckily, thanks to Lifetime and WE TV, the memories of Miami’s most loved, post-menopausal madams will always live on in our hearts… and our satellite TVs. There will never again be a women’s television network that doesn’t air nightly blocks of our favorite over-the-hills hotties. Rue, Bea, Estelle (and eventually Betty too) will always be thanked for being our friends as long as Oxygen continues to run reruns of The Golden Girls… and I can’t argue with that!