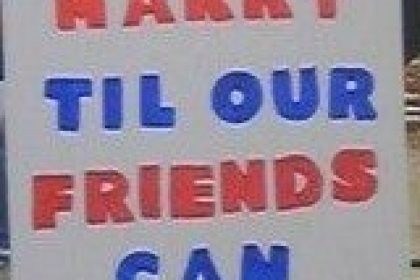 “Angie and I will consider tying the knot when everyone else in the country who wants to be married is legally able.”

This quote from Brad Pitt is one of several of its kind. Brad has made it clear that he and Angelina will not get married until gays and lesbians are allowed to marry. Apparently, this is a trend that is popping up all around the country. (And I’m not just talking San Fransisco!) I believe most couples subscribing to this school of thought do so under slogans along the lines of “No ‘I do’ until gays can do it too.”

Now, to each his own. I certainly don’t think in this day and age, any couple has to get married. Plenty of couples merely date, shack up, and sometimes even have kids without ever feeling the need to exchange vows. Living in sin isn’t grounds for church ladies to light prayer candles for you, as much as it used to be. I’m all for anyone’s choice to either get married or not. Many of our great-grandparents had to live in arranged marriages. At least we have the socially accepted ability to say, “I don’t think so!” Go modern America!

Let me also state, for the record, that I have no opposition to the idea of same-sex marriage. (However, I don’t think those who do are necessarily “gay haters” and shouldn’t be labeled as such. But that’s another blog for another time.) I see no reason why gays and lesbians can’t be married in legally recognized civil ceremonies. If the church doesn’t want to recognize it, fine. But people in committed relationships should be given the same opportunity to have all the same legal rights that go along with being married. You know, the ability to be covered under your spouse’s health insurance, receiving a bonus tax refund for filing jointly, protection from testifying against your spouse, the right to drive a mini-van, and the freedom to hate your in-laws.

But my thoughts on living in sin and same-sex marriage don’t help me comprehend the logic behind this kind of protest that Brangelina has pioneered. Maybe I’m wrong about this, but aren’t protests supposed to affect the intended party in some way? Like when union workers strike, it affects the company because no one is there to make its product. Or when people chain themselves to trees, it affects the construction workers who are now going to have to wait a few more hours to start building the new WalMart. Or like when the MLB players strike, it affects all the Yankee haters who no longer are able to accuse them of buying championships.

One woman was quoted as saying “I usually explain that I wouldn’t go to a lunch counter that wouldn’t allow people of color to eat there, so why would I support an institution that won’t allow everyone to take part.” That’s all well and good but boycotting a restaurant causes them to lose business. Boycotting marriage seems to me to only affect the the people boycotting! You opting to not get married isn’t hurting the people who vote on the marriage laws. In fact, you’re actually helping them by not getting married. They can tax you more; they don’t have to exempt you from estate and gift taxes if you give or will anything to your significant other; they don’t have to continue paying out social security, or disability to both of you if only one is eligible; they don’t have to pay out military benefits to your non-spouse; they don’t have to worry about buying you a gift that may not have been on your registry. The point is, the only people who are actually affected by this protest are the ones doing the protesting!

Don’t get me wrong. I’m sure gays and lesbians appreciate the sentiment behind this. I think it’s an extremely loving gesture to do on behalf of our homosexual friends. But other than providing misery some company, I don’t see what else this kind of stand is accomplishing. That’s not to say it doesn’t, I just haven’t yet figured out how. But maybe that’s because I’ve yet to have the opportunity to refuse marriage. Thus far, I’ve been doing it more on an involuntary basis.

And as for Mr. Pitt and Ms. Jolie, I’m sure congress is convening, as I write, to change this law so that you two can exchange rings and the whole world can breathe a huge, long-awaited, sigh of relief. We all know this country is far more concerned with your marital status than the crises in the Middle East or our crumbling economy…..and you can’t argue with that.