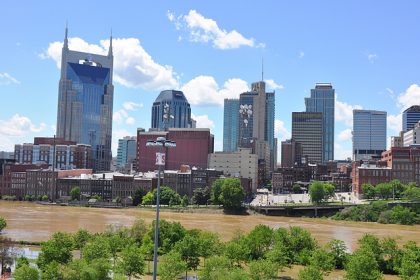 There’s a new drama that has been picked up by ABC for the 2012-2013 viewing season. It’s hip, it’s fresh, it’s 30% less fat. I am, of course, talking about Nashville, the newest prime-time drama given the green light by network television. The show is called Nashville, so naturally it’s about country music. Because we all know there is nothing else worth taking note of here in our city. (Just once, I would love to see someone do a feature on Nashville’s comedy scene, its beer fests, or its abundance of Mexican restaurants!) It’s creepy…life beyond Music Row actually ceases to exist! It’s like The Twilight Zone.

The premise of Nashville is cutting edge though. Connie Britton plays washed-up, has-been singer, Rayna James, who is trying desperately to cling to a few more good years in the spotlight. Juliette Barnes (played by Guiding Light vet, Hayden Panettiere – she was adorable as Lizzie Spaulding, wasn’t she?) is the hot, new Taylor Swift, minus the daddy-sponsored record deal. Her producers may “thank God for auto-tune” but she is endowed with all the talent she needs inside her brassiere. (Juliette Barnes, not Taylor Swift! Well, actually…) Barnes wants to take James’ place as the biggest name in country music so Gwyneth Paltrow must contend with that while also battling addiction and her mooch of a husband, Tim McGraw. Wait….that’s Country Strong. Oh, what’s the difference!

While I must admit that I am very excited about the prospect of a TV series filming here in Music City, I am disappointed in the anti-glamorization of what makes the real Nashville so great. Many years back, when I was just a poor, farm girl from Buffalo, I had delusions of grandeur involving me recording platinum albums and being heard on the radio as something other than another cheesy song requester. I knew a record deal wasn’t going to find me underneath all the lake effect so I had to decide whether to move to L.A., New York City, or Nashville. In the end, I chose Nashville. Not because I had a deep seeded love for country music. Not because I ever even listened to it, unless you count Juice Newton. I chose Nashville to pursue country music because of the camaraderie of the genre. I wasn’t much for cowboy hats, boots, or bad driving, but I loved the way the artists in country music all seemed so supportive of each other. It was almost as if the stars of country music were a family. A far richer one than I came from, but a family nonetheless.

I remember one summer working as a lifeguard at a hotel pool and the band, Blackhawk, happened to come out for a dip. They were staying at the hotel because they were playing a show in town that night. My sister, who has been a big country fan ever since it became cool for Yankees to do so, happened to be with me and struck up a conversation with the band. She told them she was a huge fan while I refrained from asking who the heck they were. They asked my sister if she was headed to the show that night and she replied that she could only afford to go to one show that summer and she had already purchased tickets to see Trisha Yearwood. I may not remember a single song by Blackhawk but I will always remember them saying this: “As long as you’re supporting country music, we don’t care who you’re buying tickets to see.”

I am pretty sure it was in that moment that I decided to pursue country music. In an industry as cutthroat and underhanded as the music business, I figured I could take serious advantage of such naivety! Ha ha. I’m kidding, of course. I wanted to be a part of the one genre that put itself above all the backstabbing, cattiness, and enunciation. So as soon as I finished school, I came down to Music City to become the next biggest country star!

You may have noticed my absence from the past few CMA shows and the weekly top 40 country countdown. OK I confess….I never quite became the country sensation I had once envisioned. I had a brief arrangement with a so-called indie label for a short while but it turned out that being funny was far more suited for me than becoming the next Nashville Star. (I can’t say for sure that my being funny suits anyone else but, too bad. Naysayers can go write their own blogs!) But while I may have hung up my rhinestone hat and spurs and traded in my mediocre chops for Microsoft Word and a laptop, I still have the utmost admiration for the family I was just a few giant steps from being a part of. So Emily Steele will never be a headliner at the CMA festival. How many other genres can even host an event incorporating so many of its stars, much less see those stars cheering each other on? It’s that mutual respect and admiration that makes country music so great. Twangy…but great!

So it upsets me a bit to see country music’s greatest asset besides Dierks Bentley being tarnished. I hate to see country being characterized as just another dirty business. I guess showmanship and camaraderie aren’t sexy enough to sell ad shares. I suppose I can understand. Where would TV be without another “who-screwed-over-who to get ahead” drama? But as long as they cast me in a guest role at least once in the first season, I’ll give it a chance. Come on…there’s always a spot for a snarky reporter with something to prove. Emily Steele on Nashville….you can’t argue with that!

Photo by US Army Corp of Engineers Nashville District via Flickr