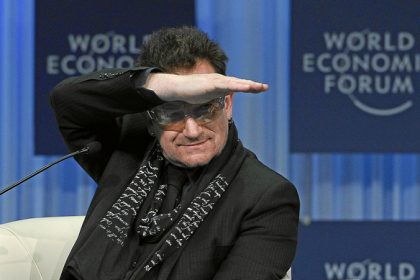 I can barely remember it was so long ago, but there was a time when I didn’t hate U2. There was a point in my life where I was eager to find out where it was the streets had no names and I didn’t run screaming from the site of a Joshua Tree poster. It’s hard for me to believe, but I once liked listening to “Sunday, Bloody Sunday”! I looked forward to Christmas because it meant getting to hear Bono crooning, “Christmas (Baby, Please Come Home)” on the radio. I spent many an afternoon hoping to catch the “Still Haven’t Found What I’m Looking For” video on MTV. Sadly, those times have long since passed me by. MTV hasn’t shown a music video since the turn of the century. And I can no longer stumble upon a recording of “Pride (In the Name of Love)” without feeling the need to hold back vomit. The dramatic life-change occurred about 6 years ago, following a single, ill-fated event.

I met my husband.

I wouldn’t say Ender is a huge U2 fan, (for those of you new to my blog, I used to refer to my boyfriend-turned-husband as “Derek” to protect his identity. But it turns out he’s almost as full of himself as I am so from here on out, I shall now refer to him by his real stage name, “Ender Bowen”), but he does face Dublin and drop to his knees five times a day to pay homage to Bono. It’s enough to make even the most savvy eclectic stab themselves in the ear. We can’t even have a conversation about other bands without him chiming in about how “U2 did that first.”

Me: “Some of The Killers’ lyrics have a lot Christian undertones.”
Ender: “U2 did that first.”
Me: “Hey, that chime sound Delphic has is pretty cool.”
Ender: “The Edge invented that.”
Me: “The Cranberries are from Ireland.”
Ender: “U2 started that.”
Me: “Chris Martin sounds just like Bono.”
Ender: “Bono pioneered that.”

After a good 6 months of that, I never wanted to hear about U2 ever again! If I never heard the name “Bono” for the rest of my life, it would’ve been all too soon. Being that they are considered to be the biggest band in the world however, I was pretty much alone in my disdain.

Until recently. I had found myself in solidarity hating the Irish rock stars until 2011, when Irish director, Nick Hamm, released the independent film, Killing Bono.

The story follows budding rock star, Neil McCormick, on his fruitless journey for fame and fortune standing in the ominous shadows of his high school classmates who are… you guessed it, U2! At every turn, McCormick is slapped with another reminder of U2’s ever-expanding greatness. With each new height the foursome achieve, McCormick becomes more and more disgusted until he eventually feels his only recourse is to kill Bono. Finally! Someone else who feels my pain!

Despite the overwhelming animosity felt by McCormick due to his inability to rise above U2 (or even come anywhere near their level of success), the film – based on the real Neil McCormick’s memoir, “Killing Bono: I Was Bono’s Doppelgänger” – Bono is actually presented in a pretty positive light. He is shown many times throughout the film wearing those ridiculous indoor sunglasses and attempting to help McCormick pave his own career. Unfortunately, McCormick is his own worst enemy. It turns out to be his own self-sabotaging attitude, not Bono’s endless stream of “Gee Isn’t He Wonderful?” awards, that keeps him from finding what he is looking for.

But even though the overall message behind the film is that Bono is, in fact, as wonderful as he thinks he is, I enjoyed seeing someone else as frustrated with his presence in the world as I am. The real Neil McCormick has obviously grown to have a genuine affection for the man, the myth, legend, but I still prefer to revere him as a douchebag. It’s the price he pays for having become such a nuisance in my marriage. I am sure my less-than-favorable opinions of him will keep him in everlasting shame. Serves him right!

So now, I am conflicted. On the one hand, I am eager to read the book so I can commiserate with the only other person on the planet who cringes at the sound of Edge’s infamous into guitar riff on “With or Without You”. But on the other hand, I immensely fear the idea of Ender seeing me with it and making the grave misassumption that I now want to engage in incessant dialogue about the life stories, musical strides, and bowel movements of Larry, Adam, Bono, and The Edge. Still, it’s a book about a wannabe rock star who finally gives up and realizes his calling as gifted writer. It’s my life! How can I argue with that?