Just One of The Guys

by Emily Steele / Thursday, 18 February 2010 / Published in Can't Argue With That 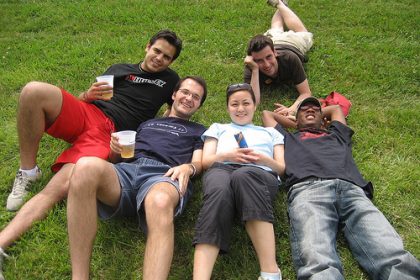 So I met the perfect woman last night. Seriously. If I were endowed with male parts, I probably would’ve asked her out! She was about 5’6″ with beautiful blonde hair. She was friendly and sweet and you could tell right away that she wasn’t one of those stuck on herself sorority girls. I asked her what she did outside of the pole-dancing class where we met (yes, I pole dance. But that’s next week’s blog!) and she said she was a student at Vanderbilt, trying to graduate early, with a degree in civil engineering and a minor in math!! And if that wasn’t enough to make you want to kill yourself, she was awesome on the pole! She climbed and swung around that thing with such style and grace that it almost made you believe strip clubs could be classy. Yup, she was definitely the most perfect female I’d ever met. And I couldn’t wait to tell my boys about her!

You see, I’m not a K.D. Lang fan. I don’t play field hockey or wear flannel. I don’t “play for the other team”. But something happened to me about 7 years ago that I think may have done some irreversible damage….I became one of the guys. Not in the literal sense, mind you. I still sit to pee and any of my boys could tell you that I haven’t the slightest ability to aim. But in 2003, without even fully realizing it was happening, I joined the not-so-elite society of “the guys”. It all started with Nathan (my identity protected male pal)*, who I met by random chance one night at a Buffalo “nightclub” when a creepy guy kept trying to hit on me and Nathan came to my rescue, pretending to be my boyfriend. A heart was crushed, a friendship was born and Nathan and I proceeded to hang out virtually every day. Then came Nathan’s buddies, Allen and Barry, who as soon as we met, we all linked arms and skipped down the yellow-brick road. Sometimes Mick and Bobby would tag along. Then Jason served a short-lived stint in the group until we discovered his double life as a professional douche bag. But no matter who came along to wherever we went, one thing remained constant….I was the only one with a regular gynecologist.

And I have to tell you, I loved it! (Being one of the guys….not going to the gynecologist!) I used to feel sorry for Elaine Benes, Kate O’Brien, or Sweet Dee never having someone to go to the bathroom with or talk trash about behind her back. But I was greatly underestimating the benefits of being the odd woman out in a gang of testosterone. The times I had as a full-fledged member of “the guys” were some of the best of my life. Not to mention all the important life lessons I learned. Before my boys, I never knew that cheap beer tastes better when chugged. I found that overly revealing outfits actually make a girl less approachable. It turns out that liquor greatly increases the odds of hitting a double bull’s eye, a flush beats a straight, a blue shell can completely turn a game of Mario Kart around, winning at beer pong is all in the wrist, Armageddon is not a bad movie, and a two-point conversion is only successful 48% of the time. I learned what qualities make up the perfect woman, that I am capable of remaining rational in an emotional situation, and most importantly, how to honor the sacred “bros before hoes” code.

It’s been a few years since I’ve been an active bro. I moved to Nashville several years ago and most of them still have the unfortunate fate of living in western New York. I’ve settled into a network of friends who raid the clearance racks, worry about looking fat in pictures, and get bikini waxes. And I’m not complaining! I thoroughly enjoy my girls’ nights of watching Beaches, drinking wine, complaining about cramps, and trading stories about “that stupid bitch” we work with! But sometimes, I long for an Irish car bomb, some dirty jokes, and a good game of A@#hole. I only get to be a “bro” once or twice a year now, but I look forward to those times all year long. Hey boys…..I miss you!

And let me tell you that you all would have been drooling over this girl I met at pole dancing class! She was the perfect woman….and trust me, you can’t argue with that!

P.S. I apologize if this blog lacks the side-splitting humor of my previous blog. Allen has been in the hospital for the past 2 weeks and it’s made me a tad sentimental. Anyway, he’s going home today so hopefully those laugh-on-the-floor-while-you-try-not-to-pee-your-pants blogs will return next week!

*Again. for those new readers who have accidentally stumbled onto my blog in recent weeks, I give everyone mentioned in my blog fake names so as to protect their identity from possible embarrassment of association with me.