Is That A Pole Between Her Legs? 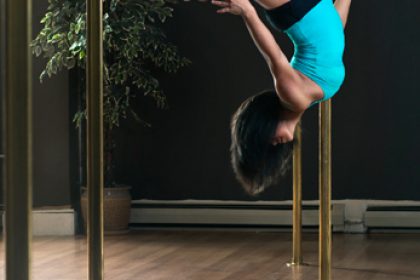 I mentioned in my previous blog how I possess esteemed membership in the elite organization known as “the guys”. Over the years, this membership has granted me access to any and all testosterone-exclusive events….with one exception. Even though I was affectionately dubbed as the “cool dude with long hair”, there was one ritual of male bonding that my ovaries and I were not permitted to partake in: The Canadian Ballet. Better known to non-Buffalonians as the strip club. (I don’t know why they call it that. Perhaps if I had been allowed to go, I might have an answer!)

I didn’t know this clause in my contract even existed until one summer when everyone was making plans for our friend, Monty’s, birthday. Nathan suggested a serious beer pong tournament at our apartment, for the coveted belt. But Allen and Jason had other plans in mind. After several intense seconds of debate, it was decided that the guys would take Monty across the border for some front-row seats to see chicks and their poles. “Cool”, I replied. “I’ve never been to a strip club before. This’ll be fun!” This was followed by several moments of awkward silence, while the guys exchanged twisted looks. Barry finally delivered the blow. “Busty” (their affectionate name for my potential child-bearing self), “you can’t go.” I was stunned! What did they mean I couldn’t go? I could go everywhere! I practically had a Y-chromosome! I was deeply offended. But as much as I protested, argued, whined, cried, pouted, and hissy-fitted, it was to no avail. There was one cardinal rule that could not be tampered with. Girls were not allowed in strip clubs, unless they were employees!

When I think back on it, I’m pretty sure that’s where my deep-rooted, subconscious desire to be a pole dancer started. So five years later, when a girl friend of mine mentioned a pole dancing class she had tried, I knew my time had finally come. OK, so I wasn’t really contemplating a career in exotic dancing. But the idea of learning how to move around a shiny, brass pole in a manner that men would find sexy was appealing to me. I called up Gym 5 and signed up for the “Goddess” package. I was on my way to sensual stardom.

There was just one problem. I have a severe coordination disorder. It’s pretty bad, and I don’t like to talk about it very often. I think I’m the only person who has ever managed to severely sprain her ankle by tripping over a water ski. I once had the wind knocked out of me during tap class. And, when I was 12, my softball coach pulled me out of a game for throwing 1 strike in 8 batters. (I probably could have lived through the humiliation of that one, except that my coach was my father!) So what in the world made me think I could excel at at something as physically demanding as pole dancing is beyond me.

The class started off with simple yoga-style warm ups. I figured I could handle that. I mean, how hard can an exercise routine involving a “relaxation pose” really be? After 30 minutes of contorting my body into poses affectionately known as “the cow”, “the cat flow”, and my personal favorite, “the downward-facing dog”, my abs were shaking worse than an epileptic at a rave! I didn’t even know I had abs until then! I was concentrating so hard on not falling on my face that the instructor had to keep reminding me to breathe! Just when I thought my legs would collapse beneath me from “the chair pose”, the instructor decided it was time to move onto the poles.

Everyone starts off learning the same basic spins. The first one was called “the fireman”, which believe it or not, consists of spinning around and down the pole like a fireman at a firehouse would. That one I mastered fairly easily. My grandfather would have been proud. It was the next several spins where my disability started to hold me back. After a couple rounds of spins known as “the Tinkerbelle”, “the Candy Cane”, and the “Camel Spin”, I was so dizzy I probably would’ve failed a sobriety test. When I moved on to “the Do-Si-Do”, which involves kicking my leg out and around the pole while only holding onto it with one hand, I lost my grip and practically flew right out the window! It was becoming painfully clear that I probably should’ve just audited the class.

I stuck with it, though. After a few weeks, we started to move on to climbing and inverting on the pole. This means you pretend you’re a monkey or Chinese acrobat and move yourself up the pole with the tops of your feet. The prize for not ripping all the skin off your bridges is that you then get to hang upside down and panic. The idea is that you use the strength of your legs to hold yourself on the pole and hang your arms to the side like a bat. That would be all well and good if I had any strength in my legs! And I’ve never seen a bat with killer thighs so something tells me that’s not how they do it anyway. I did attempt to take my hands off the pole, but instead of looking like a cool Twilight character, I slid slowly down the pole, burning off any skin I had left on my inner thighs, and landing on my head. Trust me when I tell you, it wasn’t even the slightest bit sexy.

Sadly, I am now nearing the end of my “Goddess” package. But despite my disability, I have decided to renew my package and continue with the classes. I feel I owe it to myself and all the others who suffer from my condition. (And if any of you reading this do, please join the class so I don’t look so bad!) Besides, I wasn’t allowed to go to the strip clubs and see pole dancers with my boys. And I figure the old adage holds true: “If you can’t beat’ em, join ’em” (whether they’d want you to or not!)… and you can’t argue with that!