If I Had Tenure 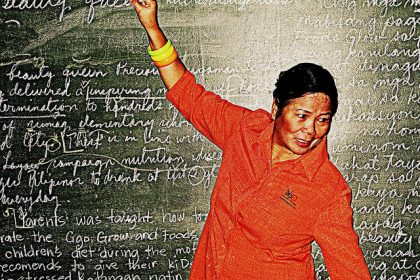 For those of you who don’t know, I actually do have a job outside of being hilariously witty. When I am not sharing my much begged-for opinions over the internet, I actually get paid to work as a high school teacher. It’s a dangerous job and one that plays upon my sanity, but someone has to do it. I teach high school drama, which most would argue is redundant. And even though I have been teaching for 6 years, my tendency to jump from district to district has kept me at non-tenure status thus far.

What is tenure you ask? Well even if you didn’t, it’s my blog and I’m going to tell you anyway. Tenure is employment status that a teacher achieves once they have survived three years in a school district without being killed or killing themselves. Once a teacher has this golden status, they are basically set for life in terms of job security, short of doing something really heinous like having sex with a student (eww), hitting a student (no matter how much they may deserve it), or being spotted singing along to a Justin Bieber song.

Budget cuts keep eliminating my positions almost as soon as I obtain them but I am on a new record here at my current school. I am in my second year at the same school and working for the same principal! It’s crazy and I’m not sure how to handle all this consistency but I’m dealing the best I can. Anyway, I am starting to think I may just have a shot at that golden tenure ring at the end of next year, but as of yet, it’s still just a dream. But like any other dream, I believe it is important to have a visualization of what it will be like when it becomes an actualization. And because of this, I spend a great deal of my down time pondering….what would I do if I had tenure?

For starters, I would come in to work every day in my sweats. Forget “casual Fridays”. If I had tenure, it would be “casual life”! Hell, some days I might even come in wearing my Care Bear pajama bottoms because why the heck not? Forget this getting up at 5:40am every morning so I can make myself look decent by showering and picking out a nice, professional outfit, and doing my makeup. Hell no! If I had tenure, I would be saving countless minutes by going to work in the same freakin’ thing I went to bed in!

Another thing I would do if I had tenure would be to stop sandwiching in bad reports between deceptive compliments when I call parents about their kids. No more trying to sneak in “Well, Johnny is having a problem getting his work turned in” in between half-cocked phrases like “He’s a very creative child” (with his excuses for why he hasn’t done his homework) and “He’s never disruptive or disrespectful” (because he’s usually asleep!). Nope. If I had tenure, it would be the God’s honest truth… “Your kid is lazy and taking up space in my class.”

The same goes for the kids. None of this pretending that I care about their self-esteem nonsense. When a kid gets in my face for writing her up for tardies and tells me she hates me and my class and can’t wait until she graduates and never has to see me again, no more taking her out into the hallway to gently ask what prompted such an outburst and see if everything is alright at home. Nope. If I had tenure, I’d be gently asking her if she really thought she had any chance of graduating before I retire. And then I’d gently ask her if she thought I enjoyed seeing her ugly mug every day, because if she did, she probably had even longer to wait for graduation than I had initially thought.

Oh, the things I would do if I had tenure! I’d start every class by telling all the kids who didn’t want to be there to just go away. Who cares where they’d go, just go away. I’d ban bathroom breaks because seriously, we all know the only people who use the bathrooms to actually GO to the bathroom are the teachers. Every time I found a cell phone, I would smash it on the floor and crush it with the heel of my foot, like a Jewish groom. (Heck, we could even all shout “Mazel tov!” every time it happened. That might even be fun.) But come one now. All your friends are in this building and your parents are thrilled to be rid of you for 7 hours. What the heck do you need a phone in school for? No more sponsoring after-school clubs. No more staying after school for 2 hours to grade tests. I’ll make up grades. They’re all subjective anyway, aren’t they? Ahhhh, what a sweet life it would be.

And then again, this might explain why I have yet to receive it….I guess you can’t argue with that!