Holding Out For a “Heroes”

by Emily Steele / Saturday, 14 November 2009 / Published in Can't Argue With That 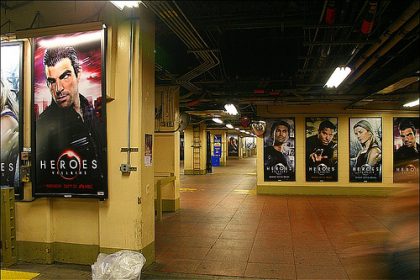 So about a year and a half ago, I was somehow suckered into watching the pilot episode of Heroes. My friend had bought season 1 on DVD and after watching it, was “convinced” that I would “totally love it.” That statement alone made me tempted to throw the collection in the same box that houses my stone-washed jeans, Disney Princess Collection CD, and the tacky, Christmas-scene blouse that my sister gave me three Christmases ago. Things that I don’t have the heart to throw away, but I wouldn’t dare chance people knowing I own. Wayne is a great guy but after he was “convinced” I would “absolutely love” The Hot Chick (starring Rob Schneider), his credibility in assessing my tastes seriously plummeted. Not to mention, the whole synopsis of the show was about real people with comic-book-character powers and abilities. Had Wayne ever met me? What part of my personality made him think I would have even the slightest bit of interest in a show about invincible cheerleaders and flying politicians? I wasn’t even crazy about Batman!

But somehow, the episode made it into my DVD player. I watched all 23 episodes by the end of the week. I couldn’t believe it! In the entire 3 years I’d known Wayne, we’d only ever agreed on one movie and several reruns of “The Golden Girls.” How had he managed to find such a gem? I was completely hooked. I was even glad I hadn’t started watching it on TV because I couldn’t imagine having to wait a whole week between episodes. I’m surprised I didn’t lose my job from all the nights of staying up til 1am, telling myself “just one more episode.” (No, that came later, from a nasty, back-stabbing, liar….but that’s another blog or another time!) Yes, Heroes had changed my life. It gave me a long-awaited reason to keep paying my cable bill, and an incredible marriage to my ideal husband. (OK that last part was only in my daydreams, but that fantasy of marrying Detective Matt Parkman -the character, not the actor- was incentive enough to keep me tuned in!)

But then, something awful happened. Season 2! Talk about a let down. Where were the riveting, action-packed, “holy s*&%, I can’t believe that just happened” episodes that I had been so captivated by in season 1? Who the heck were these new heroes with extremely useful powers like bleeding sludge out your eyes or the ability to light your cigarette from the palm of your hand? (Although I do have to admit, that does save you the trouble of having to fish through all your drawers for a lighter.) What is the point of Hiro traveling through 17th century Japan to dual with Sting? Why does no one in Japan question this guy’s blond hair and blue eyes? If Peter has the ability to take every one else’s powers, how is it he ends up all the way in Ireland and never even tries to find Bono to steal his superhuman ego? How does Kristen Bell (Elle) manage to keep her hair from frizzing with all that electricity running through her? Far too many mysteries to solve. And the worst part was, none of them were interesting enough for anyone to try! The most riveting storyline was the nail-biting episode where we were all on the edge of our seats, waiting to see if Claire was going to make the cheerleading squad at her new school.

And just when you thought “Petrelli for President” was as boring as it could get, season 3 comes along, showcasing my husband (Matt) on a quest through Africa to follow a turtle!!! It is a very important journey. At the end, Matt learns that he too can go temporarily blind and paint 1960’s pop art. I think I’m going to follow the stray cat outside my classroom and see if it leads me to the ability to dance. Why not? Can’t be any bigger a waste of time than trying to keep up with Heroes!

I couldn’t help it. The first half of season 3 was such a snooze that I went to my doctor to get tested for narcolepsy. I decided to skip the second half and say nightly prayers that season 4 would see the show return to its season 1 format of kicking ass! And yet again, I was disappointed. It seems in a feeble attempt to make up for putting everyone to sleep during season 3, the writers and producers decided to assemble season 4 while all consuming heavy doses of speed! Now, the plots are so involved, so fast, and so twisted within themselves, I can’t even keep up. I started watching the pilot for season 4 and six minutes in, my brain exploded! By the time I had managed to pick most of the remaining pieces of it off the couch, I was so far behind, I couldn’t even see the tail-lights of the plot. All I knew was, the sassy, brunette girl from Days of Our Lives would not be catapulting into prime time via this show, seeing as how hey killed her guitar-hero champ character off before the episode’s end. I haven’t even attempted to watch an episode since. I just can’t afford another unexpected lobotomy. What if this time I loose something essential?

Well Wayne, we almost had one. You hit it out of the park, only to be caught by a little kid, who reached over the wall to catch it while it was still in play. I still hold out hope that someone will be able to sit down with me and explain this last season to me, so I can be ready for season 5. Maybe that will be the season where the show finally gets back its mojo. In the meantime, I guess that copy of Six Feet Under Season 1 will have to find its way into my DVD player. Perhaps that one has enough stamina to stay a home run. Either way, I have to watch it sometime so you’ll stop mentioning it every time you come over….then I’ll be able to say “yes, I have watched it” and you can’t argue with that!