Don’t Hate The Great Ones 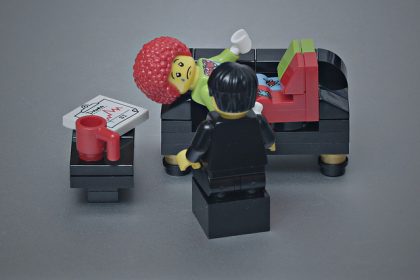 When you’re me, you blog about it.

Ender recently emailed several old acquaintances from back home, updating them about our current projects and undertakings. Sure, he was completely disregarding of their lack of previously-expressed interest, but you embrace that kind of shame when you’re relying mostly on self-promotion. Some responded with enthusiasm. Most ignored it, choosing to focus instead on their own preoccupations. But one reply took us both by surprise. Not only did he think our work was frivolous and unworthy of notice, Ender’s former college professor suggested that Ender and I both seek out therapy for our inflated egos.

Wow! Seriously? We need therapy for our inflated egos? Ok Ender, sure. His sense of self-worth has always been a little skewed in his favor. But me? This guy doesn’t even know me! Where does he get off saying I am in need of psychiatric counseling for my self-regard? Little does he know… I am in need of therapy for far greater things than my ego!

I think the fact that I spent high school chasing the bottom dwellers of my class would be a far better reason for mental remediation than my self-adoration. I had a lot of guy pals who played sports, marched in the band, and had GPAs over 4.0 but if a boy were in danger of not graduating, that’s when I made my move! As you can see by how annoyingly intellectual and talented my husband is, I have managed to depolarize my internal loser-magnet. But the time I spent during which it was active seems a much greater justification for therapy than my undeserved sense of self-worth!

Perhaps that I willingly chose to be a part of profession where I deal with 150 teenagers on a daily basis classifies me as mentally imbalanced. Being the object of so much of their emotional instability certainly causes a lot of my own. I would argue that the constant scrutiny from a school board consisting entirely of people who never worked in a school should probably send me running for the nearest Xanax distributor. And trust me, in the world of public education, it isn’t even possible to have an ego….much less an inflated one!

And I have to admit, I have been referred to as “crazy” on more than one occasion due to my desire to be in the entertainment industry. Somehow, wanting to work 12-hour days, sometimes for weeks at a time, seems strange to normal people.

The constant rejection and fierce competition of the business would force most rational people to the brink of insanity and beyond. So the fact that I haven’t reached insanity yet likely means that I am well on my way. For that, I will concur that I might need to have my head examined. But not because it is too big.

Even being mother to 4 cats rather than human children stands to be a better reason for me to seek out professional help from the mental health community than the high regard in which I hold myself. My preference for children of a more furry nature might just indicate a fear of responsibility and snot. Pediaphobia might be a reason for me to indulge in therapy. But again, it’s the result of little people, not large egos, that will land me there.

You should’ve done your homework, Professor! Yes, I am desperately in need of therapy, but it has nothing to do with my so-called inflated ego. Actually now, I may not even need it at all. This online venting may have been all the therapy I needed. You can’t argue with that!