Always a Bridesmaid, Finally the Bride

by Emily Steele / Saturday, 30 January 2010 / Published in Can't Argue With That 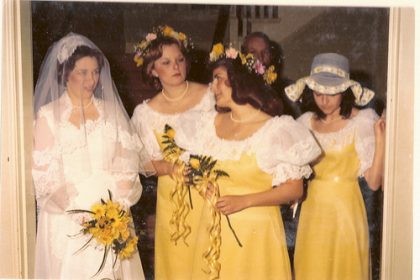 Well, I must apologize for my prolonged absence from this blog. I know it’s been a difficult month for you, not having access to my well-researched opinions on current affairs. But alas, I am back! So you may all breathe a long-anticipated sigh of relief….Emily’s inarguable arguments have returned.

The reason for my extended absence is rather inconceivable. In a world where many climates are reaching record-low temperatures during a global warming epidemic, where people pretend their children have been carried off in a balloon in an attempt to get their own reality show, and in which Alec Baldwin has a hit TV series, something even more unbelievable has happened….I have gotten engaged.

That’s right. It’s finally happened. After years of racking up enough bridesmaid dresses to give Katherine Heigl’s character in 27 Dresses a run for her money, I finally get to be the one with a cheap, plastic replica of myself on top of a 4-tiered buttercream cake. Like most females, I have been dreaming about walking down the aisle ever since…well….I could walk down the hallway! So as soon as Derek got up from his knee outside that public restroom off of Interstate 81, I began planning. Little did I know, I was already way behind.

I remember secretly mocking those friends of mine who started planning their weddings before they were officially engaged. As in, they already had churches, reception halls, and videographers booked and had distributed their bridesmaid gown requirements to me before their boyfriends had even begun layaway plans at Zales. (I hope neither one of them is reading this, because I’m not making this up!) At the time, I stuck my nose up at the thought of how far they were jumping the gun. But now it seems the joke is, in fact, on me. It is now their turn to laugh sadistically as I scramble to find an affordable DJ and a florist who is available on a mere 9-months notice. (Well, at least the one who is still married gets to laugh!)

Seriously, with all the stress of finding a photographer who won’t charge me 2 grand for a dozen pictures or a church that will overlook the fact that we may have slacked off in our Sunday worship routine for the past 237 weeks, I haven’t even had time to notice how beautiful that diamond looks on my left hand! I’m so busy agonizing over whether we should serve chicken or steak at the reception and figuring out what possessions I can sell in order to pay the $850 that my dress is going to cost, that I’ve nearly forgotten what Derek looks like. Now it all makes perfect sense. Those girls planned their weddings ahead of time so they could actually enjoy being engaged! Who would have known that these impatient princesses were actually brilliant, strategic minds plotting a giant victory in the war of the wedding plans?

I admit, I mocked them at first, but I have now become a full-fledged advocate of their cause. After attempting the more traditional path, I now say plan the wedding then get engaged. After all the sleep I’ve lost trying to do it in reverse…I can’t argue with that!