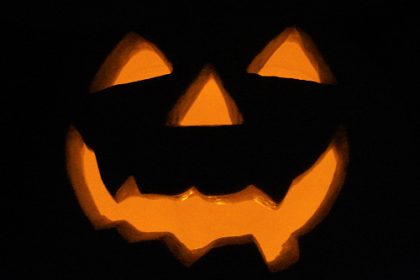 Ah it is that time of year again. The leaves have fallen. A chill is in the air. Pumpkins have been picked. Cider steams up my morning mug. Yes, this is absolutely my favorite time of year. A time when the hard-core, conservative Christian residents of the Bible Belt attempt to ban Halloween from the rest of us heathens. I am sure I am going to get a lot of slack for this one, but I have to be honest with you….I really don’t care. I’ve lived here in the Belt for 5 years now (granted, the very ghetto part it….you know, the part in which you can only beat with the Old Testament because we haven’t scraped together enough money for the complete King James version yet) and every year this controversy baffles me.

Now, in all fairness, I’m from the north, which automatically means I am going to Hell. I’m pretty sure that’s what Damn Yankees was all about. Until I moved below the Mason-Dixon Line, I didn’t know there were people who didn’t celebrate Halloween! I just assumed it was a standard part of childhood; much like birthday parties, summer vacations, and accidentally setting your backyard on fire. I went to church nearly every Sunday morning. (Yeah, that’s right…we Episcopalians actually have to get up and go to church on Sunday mornings. We don’t get to just go at our convenience anytime over the weekend!) But I can’t recall a single time, in 25 years, that someone tried to tell me that Halloween was evil or satanic.

So you can imagine my flabbergastment (when you write your own blog, you get to make up your own words) in 2004, when I began my first teaching job as a “southerner” and inquired about what kind of Halloween festivities would be taking place at the school and was met with awkward stares, much like the ones on the faces of bystanders in those dreams where you suddenly realize you’ve walked into a room naked. Thankfully, another radical teacher took pity on me. She pulled me into a dark corner and whispered that “we don’t acknowledge Halloween in the school. Too many families believe it is a threat to their Christian faith.”

Huh??? Giving candy to kids is a threat to Christianity? To dentistry, perhaps, but Christianity? That must’ve been left out of my Bible Cliff’s Notes. I don’t recall learning that at my Catholic university. Of course, we had a bar on campus too so maybe that discredits any religious arguments we alumni might submit. I know what you’re going to say…”They feel it is a glorification of demons, witches, and the Devil. Celebrating such evils is a crime against Jesus.” That would all make a whole lot of sense too, except for that Halloween started as a Christian holiday! Long before it secured its place as a secular holiday, October 31st was the Christian celebration of All Hollow’s Eve, occurring on the night before All Saint’s Day. Good, Jesus-praising people dressed up as ghosts, ghouls, and Kayne West in order to scare away evil spirits. They carved scary faces into jack-o-lanterns not to invite wickedness in, but rather keep it out. (Those who couldn’t afford pumpkins just took in the nearest black cat in heat, which generally did the trick as well.) These traditional Halloween rituals weren’t a celebration of evil. They were an attempt to scare it away with a dose of its own medicine. Maybe someone should try that with Michael Moore. Force him to watch his own movies and maybe he’ll be scared away. It’s worth a shot.

But despite all that, if people still believe that allowing their child to dress up like A-Rod or other villainous creatures will affect where they spend the afterlife, fine. Don’t let them wear “demonic” costumes. But is it really necessary to forbid them from dressing up as clowns, princesses, and superheroes? I’m probably alone in this, but I think depriving your child his or her natural right to go door-to-door and beg for candy once a year is the true evil. Where would today’s youth be without bite-size Reese’s and Snickers? I have countless fond memories of trekking through several feet of snow, with my cutesy little costume stretched over a parka, and trick-or-treating through my upstate New York neighborhood. I could never deny my child those experiences. That would be unethical!