by Emily Steele / Thursday, 21 February 2013 / Published in Can't Argue With That 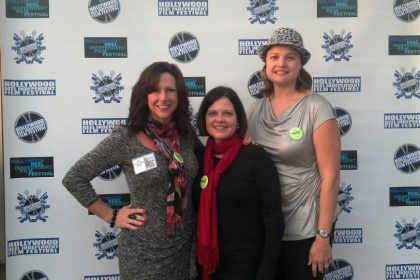 I’ve always known I was a great writer. It was never really something I questioned. I knew I had the gift of literary genius from the first time I put the pencil to paper and was able to string together such remarkable words of fabulousness. It was getting the rest of the world on board that seemed to be the challenge. Oh sure… people thought I was amusing. Rarely did one peruse one of my infamous blogs or Dream Row articles without chuckling to themselves and thinking “Ha-ha. Ha-ha! Oh where does she get her dazzling wit?” But having them revere me as one of the greats, well, that was another story.

And then, almost as if destiny t’were willing it to be… like Cinderella emerging from her tattered gown into her glass slippers (and a prettier gown!)… like the 1980 USA men’s Olympic hockey team defying all odds and beating the evil Soviets… like Arrested Development coming back seven years after its premature cancellation… I became an award winning writer.

I know, I know. It seems like the story should end there. I mean, what could possibly be more exciting than that? But as you might have guessed from the title, this article is about my first film festival, and becoming an award winning writer only vaguely describes part of how I got there. It is relative though. And I love talking about it, so allow me to digress for a moment.

Back in July of 2012, Nashville hosted its chapter of the annual 48 Hour Film Project. This year, 51 teams were assembled to each write, shoot, edit, and score an original short film within 48 hours. Friday night, team leads gathered to randomly select their film genre and to find out this year’s three required elements. At 7pm, Wendy Keeling, our producer and co-director, called me and the rest of the writing team to give us our task: We needed to write a 4-7 minute coming-of-age script incorporating a gym teacher named Fritz or Freida Sinclair, a blender, and the line “We need to get going.”

5 hours later, we had a script. 36 hours later, we wrapped shooting. 48 hour later, we had a finished film called Just Grate. And it truly was “just grate”! For a 6 minute film, conceived and completed in two days, it really was something to be proud of. The cast was phenomenal, including especially noteworthy performances by Manon Guy, Callan McLean, Louie Lawless and Alice Raver. The competing films premiered the following week and Just Grate took home a total of six awards! Out of 51 teams, my script won Best Screenplay and 1st Runner Up for Best Film. Yes, that’s right. In case you didn’t catch it the first two times I mentioned it, I am now an award-winning writer!

The funny thing is though, the only thing I was looking for was the hope that other people might finally see what I had known all along… that I am brilliant beyond belief! Winning awards via the 48 Hour Film Project seemed to fulfill that need, so the thought of doing anything beyond it never really occurred to me. So when Wendy told me she was going to be submitting Just Grate to film festivals, I hadn’t the faintest idea of what to expect or what would be expected of me. Would I have to promote our film to industry bigwigs? Would I need to buy a snazzy new wardrobe that would make me stand out among the thousands of other aspiring screenwriters? Would I become an overnight celebrity and have to start wearing oversized sunglasses whenever I went to Starbucks? Would I have to start drinking Starbucks???

Lucky for me, I happened to have a guardian film angel who bestowed upon me the filmmaker’s bible. Otherwise known as Chris Gore‘s Ultimate Film Festival Survival Guide: The Essential Companion for Filmmakers and Festival-Goers. This book taught me everything I needed to know about surviving my first film festival. Hence why it’s such an aptly named book. Seriously though, I don’t receive any endorsements for writing about the book (although I’ll take some, Mr. Gore, if you are ever so inclined as to hand some out!) but anything you could possibly want to know about the film festival experience is in it. It covers everything from selecting the right festival for your film, to hyping your film once its in, to sneaking into the best after-parties! I read it cover to cover, except for that stupid copyright page. I was ready to participate in my first cinematic celebration!

I didn’t have to wait long. Just before Thanksgiving, we received our first festival acceptance. Just Grate would be premiering at the Hollywood Reel Independent Film Festival in Hollywood, California. Before I had read my trusty Survival Guide, I assumed this meant the work was done and it was time to kick back and relax until the trip. But there is a LOT to be done in a very small window of time between your acceptance into a festival and your premier! Getting into the festival alone will not grant your film any exposure to an audience other than yourself and any cast and crew you happen to bring with you. So a major pre-premiere task is promotion. This means contacting any media outlets you can to try and get them to cover your film. The more press coverage your film has received before its festival premiere, the better your chances of a good turn out are. Believe it or not, saying it was written by an award-winning writer isn’t enough.

And even if you get a ton of media coverage for your film, you cannot rely on that alone to fill seats at your premiere. You have to get the word out in other ways, too. Hanging up posters, distributing cool swag with your movie’s name or an important scene from it are tried and true ways of creating a buzz. So once you arrive at the festival, it’s time to hit the ground running. A lot of people will tell you to “paper the town”, but you don’t want to waste your time and your materials (which are typically not free) posting and distributing them in places that will not attract your target audience. Sure, the local senior rec center may have a high traffic flow but are those folks likely to spend $10 on a pass to see an indie slasher flick? Only if they are my grandparents and only if the slasher works for the mob.

Granted, HRIFF was only my first film festival but I learned a very snazzy technique that helps in getting people to come to your premiere… going to theirs. It might mean staying for the midnight showing to sit through another two hour film about the same story you’ve seen 20 times already, but filmmakers appreciate other filmmakers who come to see and appreciate their work. And they will often-times show that appreciation by returning the favor and coming to see yours. The key is to let them know you were there. So be sure to find the director or producer or under-appreciated but highly- essential writer and tell them how much you loved their film. Find something specific to compliment. Even if you didn’t like it all that much, make something up. Filmmaking is a very narcissistic business and flattery can get you very far. That last part wasn’t a joke. I mean, it was funny, but it was also true!

Finally, when the promotion and the schmoozing have all been done, it’s time to relax and enjoy the fruits of your labor. Yes, it’s very nerve-racking to be a part of a film festival, especially with all the stress and anxiety of the things that you have to get done and the things that can and do sometimes go wrong. (ie: Your sound doesn’t sync correctly, there’s a typo in your credits you never caught before, your lighting looked fine on your computer but looks way too dark on a big screen, etc.) But you don’t want to put so much pressure on yourself that you forget to enjoy the experience. When our premiere day finally arrived, we were nervous. But as soon as the lights went out and those opening credits came up, I just sat back and enjoyed a good, long moment of pure excitement! I had a film premiering in Hollywood! Nope. I can’t argue with that!