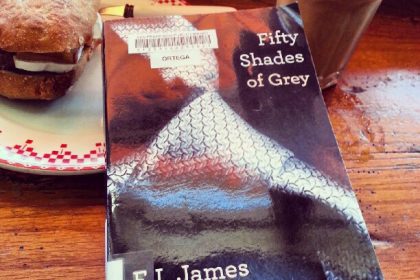 Well, I’m not proud of it. I’ve always sort of prided myself on being an up-streamer. A salmon, if you will. You know, someone who doesn’t just go with the crowd, and in fact, makes a special point to go against it. Yes that’s me…..Miss I’m-Too-Good-For-What’s-Popular. You can bet that if everyone in the room is cheering for the Patriots, I’ll be rooting for the Giants, just to tick everyone off. (Well, that and because Tom Brady is the most vinegarous of douchebags ever to play in the NFL). It’s true. I’m quite obnoxious when I want to be, and occasionally even when I don’t want to be. I am an anti-bandwagoneer, despite my love for The Oregon Trail computer game. So how I wound up with a copy of 50 Shades of Grey in my hands is a mystery destined to remain unsolved.

I hate to admit it, but I think sheer, morbid curiosity got the best of me. Sort of like those rubberneckers who can’t help but stare at a major accident as they whiz by in their Subarus, I had to gawk at this piece of Twilight fan fiction that somehow integrated itself into pop culture and practically overnight had gone viral. And by viral, I most definitely mean of the nature of, caused by, or relating to a virus or viruses. Because for as much time as I spent fighting my gag reflexes while reading it, I can only assume this is some new strand of influenza that the flu shot unfortunately does not vaccinate for. (Not that I get a flu shot anyway, but I think you get my point). I would rather suffer through the swine flu than have to read that compilation of crap ever again!

Granted, as an award-winning writer (Ender and I have a bet going as to how many times I can work that phrase into a conversation, and I think this counts as another point in my favor), I hold slightly higher expectations for things I read than does the average Joan. It’s not that I expect everything I read to be as quality caliber as what I write. Come on now… that would be an impossible task for almost any writer! But I do believe that if I am going to invest several hours of my life to a work of fiction, it should at the very least abide by something even slightly resembling standard conventions of a modern novel. Things like riveting characters, realistic dialogue, a plot!

Sure, there are a million tawdry sex scenes in it. But have we become so sex-obsessed in our culture that we don’t even care if it’s believable? Yes, I know that we all have sexual fantasies that we know could never really happen in life but we entertain ourselves with anyway. We all have watched Star Wars too. (OK I haven’t, but the rest of the living world has). At least Jabba the Hut didn’t look at Princess Leia in that golden bikini thing and say “Oh my!” My point is, 50 Shades is so over-the-top ridiculous that it makes it impossible to even become aroused! I mean seriously. I have heard plenty of dirty slang for “vagina” in my day but never has the phrase “my sex” been one of them. And virgin or not, how has that girl never managed to get a bikini wax done? That is not merely “unarousing”; it’s downright gross! If I were batting for the other team, I’d have to send her in to an esthetician pronto before I’d even consider putting my face anywhere near that. Please tell me she at least shaves her legs! But this one truly gets me… who out there has ever been in a heated moment of unbridled passion and uttered the phrase “oh my”???? Something tells me not even Judy Garland in her most drunken of hazes ever called that out before climaxing! I must confess, by the end of the book, I was cheering for that man to tie her up and gag her. Not for anything sexual though. I was hoping he’d just leave her there and be done with it! It could have saved everyone from another 2 novels of this drivel!

And honestly, all that could be overlooked if the rest of the writing were even the least bit decent! But sadly, I have read better prose during my Baby-Sitters’ Club days back when I was still in elementary school. I truly think if Ann M. Martin attempted to write porn, she’d have done a better job than E.L. James. I am sure James is a nice person and all, but Mary Anne and Logan had a more intriguing sex life than Ana and Christian. If Judy Blume had hooked up Peter and Sheila, it would’ve been a far better use of printer paper. Hell, Thing One and Thing Two would have made for a more believable romance!

Then again, maybe I am just jealous. This woman writes not one but THREE worthless pieces of monkey caca (oh my!) and has more money than I will probably see in my lifetime. She has a triple-crown of “best sellers” and I have this blog. I guess it’s time for me to start working on a way to turn Katniss and Peeta’s innocent romance into a Skinemax special feature. At least Katniss has spent a great deal of time living in trees. It makes sense for her topiary to be overgrown!

No, I don’t have billions of readers, or a multi-million self-publishing profit margin. But I do have the satisfaction of knowing what I write is up to the caliber of my expectations and is enjoyed daily by me. You can’t argue with that!